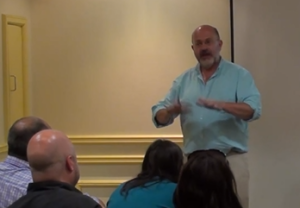 This is a video of a personal appearance by John Sweeney. In it, he describes his experience with the Church of Scientology to a small audience.

John Sweeney is a British investigative reporter. In a distinguished career, he has toured war zones, filmed secretly in North Korea, confronted Vladimir Putin – and more. Only once (to his intense embarrassment) has he lost his temper on camera.

Significantly, this happened when he was making a programme about Scientology during which the Church subjected him to an  intense programme of surveillance and provocation – “Scientology and Me”  which appeared in 2007.

Some time later, Mike Rinder a top spokesman for the Church who had been involved in ‘handling’  Sweeney, became disaffected and left the organisation. He has since become a prominent critic, and featured…